There are many misconceptions when it comes to marital property division in divorce. These misconceptions can lead to unfair divorce agreements and lopsided divisions of marital assets and debt. Here are five common myths: 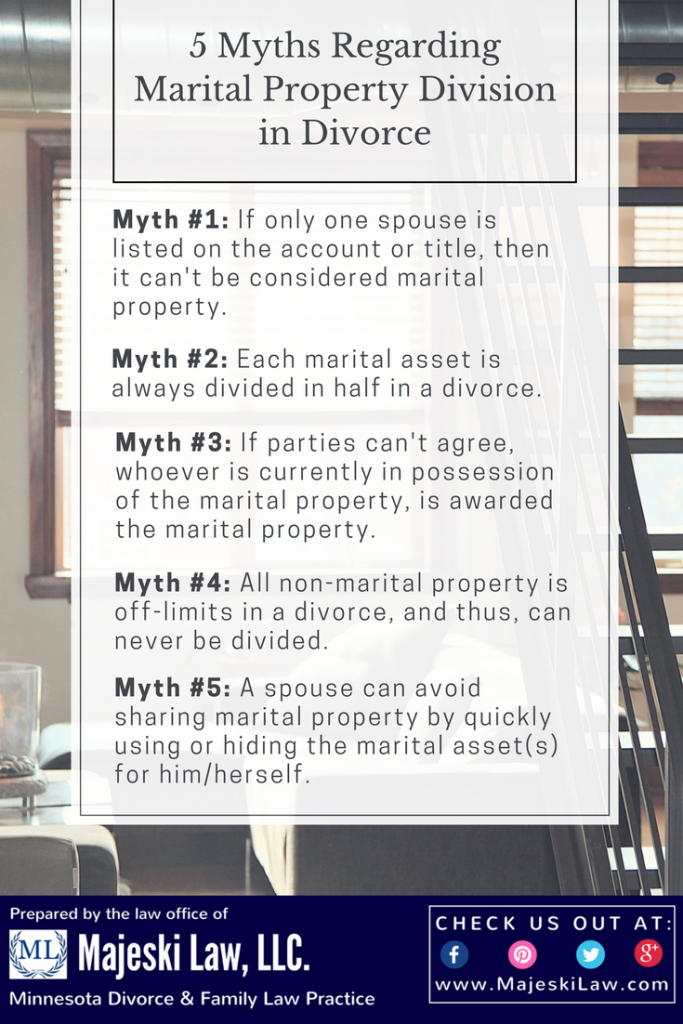 MYTH #1: It’s not marital property if only one spouse is listed on the account or title

False. Any and all property acquired by either spouse after the date of marriage and before the valuation date is Marital Property.

This is regardless of whether the title is held individually or by both spouses (Minnesota Statutes, Chapter 518.003, Subdivision 3b). In fact, all property is presumed to be marital property in a divorce. Therefore, Minnesota law dictates that you have to prove that an asset is not marital property.

MYTH #2: Each asset is always divided in half during a divorce

For example, with real estate, this may mean hiring a third party to appraise the value the home.  After each martial asset has a monetary value, the parties divide the marital property so that each ends up with a similar total value.  This ends up being half usually, but not always.

Also, if there is only one vehicle in the marriage, the party that needs the vehicle may receive it. However, the other party is compensated by being awarded some other marital asset that is equal to the value of his or her share of the vehicle.

Instead, it’s important that you take into account the specifics of your situation. After all, what was in the best interests for your friend during his or her divorce, isn’t necessarily going to be in your best interests.

MYTH #3: When parties can’t agree, whoever is currently in possession of the property is awarded it

If these aren’t successful, the couple can go to trial to ask a Judge to decide. As mentioned earlier, Judges in Minnesota are tasked with the responsibility of a ‘fair and equitable” division of marital property during a divorce. Judges look at and use specific factors to evaluate and help them make this decision.

How marital property is divided

In Minnesota, the Judge bases his or her decision on all relevant factors including, but not limited to:

In addition, the court must presume that each spouse made a substantial contribution to the acquisition of income and property during the marriage, and marital misconduct is not to influence the distribution of marital property. (Minnesota Statutes, Chapter 518.58, Subdivision 1).

Lastly, if there is a substantial difference in the value of a marital asset between the date of valuation and the final distribution, the court may adjust the value to promote a fair and equitable distribution. (Minnesota Statutes, Chapter 518.58, Subdivision 1).

MYTH #4: All non-marital property is off-limits in a divorce, and thus, can never be divided

The court will use all relevant factors to decide non-marital property division as well. In addition, the court may award household goods and furniture not acquired during the marriage to either spouse. (Minnesota Statutes, Chapter 518.58, Subdivision 1).

MYTH # 5: A spouse can avoid sharing marital property by quickly using or hiding the marital asset(s) for him or herself

False. Neither party can dispose of any marital asset(s) during the divorce except for:

If a spouse during or shortly before the divorce transfers, encumbers, conceals or disposes of marital assets the court can compensate the other party. The court can place both parties in the same position they would have been had the transfer, encumbrance, concealment, or disposal not occurred.

It’s also flagrantly dishonest. If a Judge weighs a spouse’s credibility later, a track record of dishonesty can be held against him or her.

For other divorce or family law questions, please consult the list to the left or the FAQ page.  If you’re interested in retaining an attorney to help you, please feel free to contact my office for a consultation using the contact information on the left or the contact form on the Majeski Law home page.